For more than 25 years, he has been dedicated to supporting community and national charitable organizations. Mr. Krenn has used his popularity to raise more than $1.2 million for Pittsburgh charities through the production, release, and sale of more than 200,000 comedy CDs. He has also worked to raise funds for national organizations such as Toys for Tots, the Multiple Sclerosis Service Society, and the Cystic Fibrosis Foundation.

Jim Krenn sat down with the Beaver County Times to discuss his post-WDVE world and his future plans:

But the ousted WDVE-FM morning man can’t appear on Pittsburgh’s airwaves until August due to a standard “non-compete” clause that was in his contract.

So he’s going back to his roots, headlining a May 26 comedy show at the Byham Theater in Pittsburgh.

“The bulk of the show will be standup comedy from me, but there’ll be a bit of a variety show, too, with some comedy friends from L.A. and from around here,” Krenn said Wednesday following a press conference announcing his post-‘DVE plans.

Krenn said he will remain in the Pittsburgh area, entertaining local fans through podcasts, blogs, social media and his website, jimkrenn.com.

Though his ultimate plan is to return to radio...

Read the rest of the story at talent network news.

Jim Krenn and his all-star cast of comedy and music friends present an evening of live entertainment not seen in Pittsburgh before. A blend of video vignettes, live standup comedy, improv and live music performances by house band and acoustic acts. 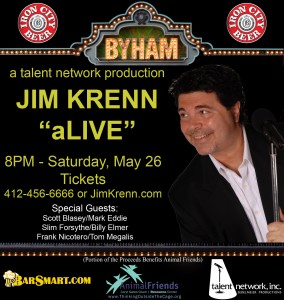